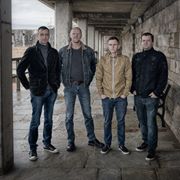 Originally formed at university in Plymouth in the early 1990’s they started their recording life as The Kites, releasing one cassette EP and even the lovely ‘Larry’s Back’ on Flexi disc!

25 years later, life under their collective belts, they return as Lost Ships. Here’s ‘All of the Pieces’

You can stream their e.p. here –  echoes of ‘Sally Cinnamon’ – if ain’t a Rickenbacker on the intro – I’ll eat my beanie hat!