Photo above – The Belltower

In January 1991, Danny and had to move from our basement flat in the Angel, Islington to sharing a council flat in Stoke Newington, North London, with Shelley and her boyfriend Andy. I knew Shelley from the Rock Garden, she was one of the venue managers there.

The venue’s owner, Arthur, had decided to grow the company and had bought the premisses next door, an old basement student club and renovated it. We had meetings down there to look at various plans with designers and builders. It opened as The Gardening Club in late 1990 and Shelley was invited to manage it. Now financially overstretched with an attempt to float that hadn’t worked, I was made redundant on my first day back in the office, New Year 1991. Danny and I needed to move somewhere cheaper to live and Shelley very kindly offered their place for us to share.

I started to book lots of little gigs around London. I asked one of my friends at the Rock Garden to photocopy me all of the year before’s booking diary so I had loads of phone numbers. The Bull and Gate in Kentish Town, Haven’s Stables in Ealing, pubs in Islington and Lewisham. I was collecting fliers from Prontaprint on Islington Green, when I bumped into Andy Winters. Andy invited me for an interview at his new label,  Ultimate Records.

Danny and I had already been going to the Yellow Book Club, run by Frank Perkins on the Friday nights at the Rock Garden. Myself and my now ex boss Sean McDonnell  offered Frank the Saturday night at the Gardening Club in 1990 while the building work was still taking place. His night Ophelia started when the Gardening Club opened in February 1991 and we were regulars from the off. Shelley would put us on the guest list and the bouncers soon knew our names and greeted us warmly.

Andrew Weatherall, Terry Farley, Paul Oakenfold, Justin Robertson all d.j.ed there. These nights were wonderful and a moment in London clubbing history.

We were starting to make lots of new friends there. At this time the licence was until 3am.

We were still running the Buzz Club in Aldershot and had a local band night on Saturday 12 January. Local band nights were the chance to make a bit of cash. We used to book one whenever we needed a little financial boost and not risk a loss. 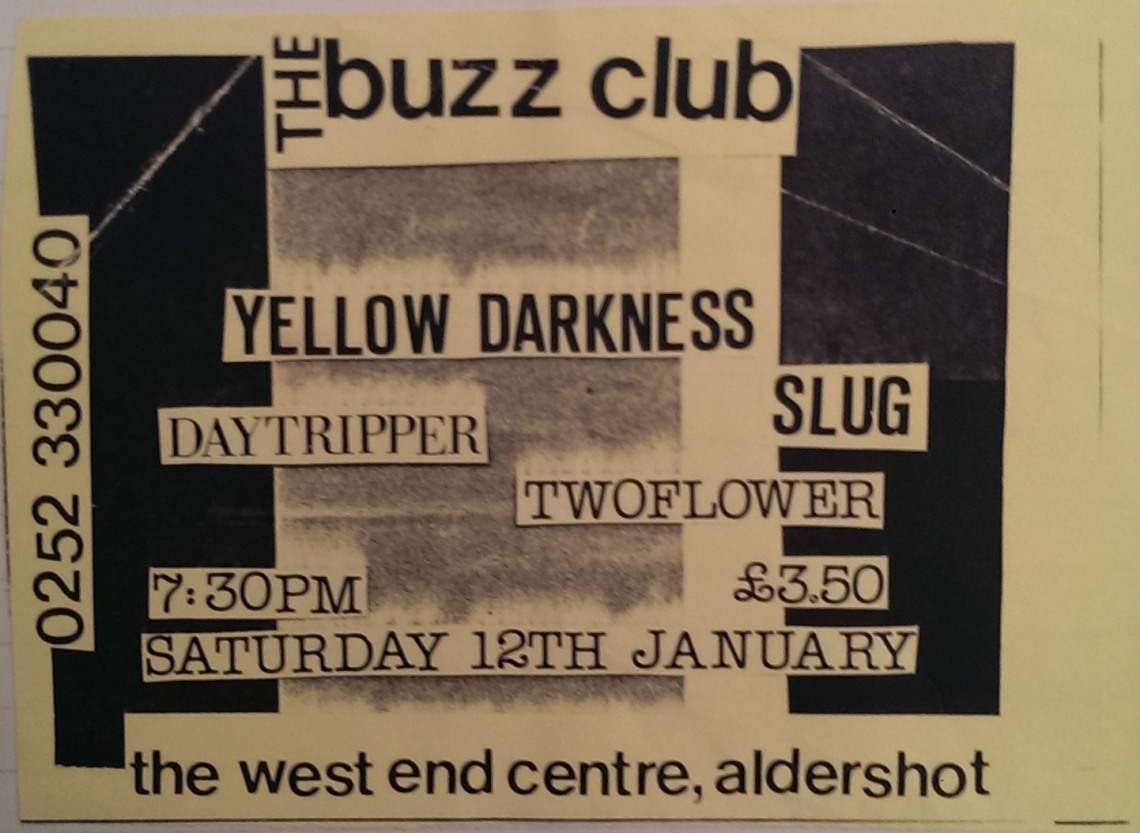 On 16th February, The Manic Street Preachers played. I loved ‘Motown Junk’ which I had on 12″, released by Heavenly Records. I had actually booked them a couple of times for the Rock Garden, just on a normal Tuesday night paid on a ticket deal. I had phoned the number on the cassette and it was Richey’s mum who would answer. She would call upstairs to let him know it was me on the phone for him.

A fifteen minute film of that Manics Buzz Club gig was found in an attic in 2013, unseen for twenty years. You can’t hear James Dean Bradfield‘s vocals at the start as Ben (the camera man) is standing to the side of the stage. However this is where Richey is playing and so it makes it all the more poignant. Ben moves to the front of the stage at 4:45 and the rest of the clip has great sound. Watch for fight in the crowd at 6:52. 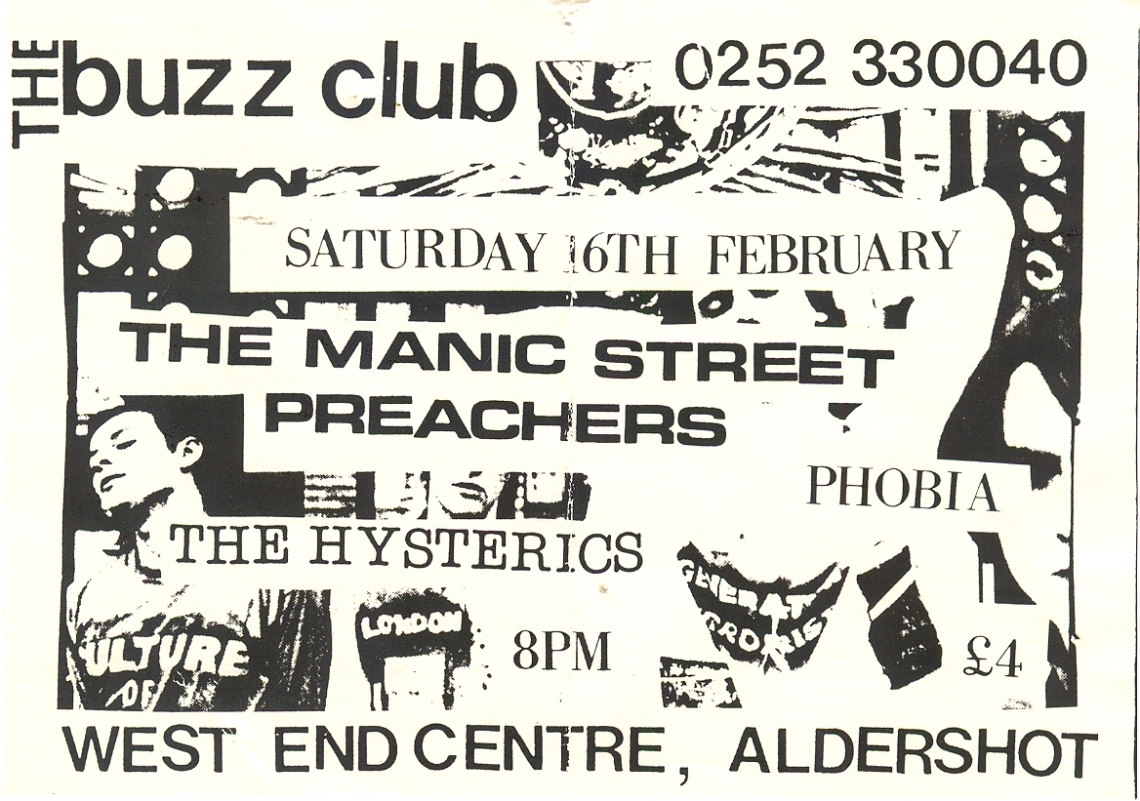 February was pretty full on. I had my interview and started at Ultimate Records as press officer, plus all the gigs I had booked in January took place in February. I was working all day and then, on most nights, heading off to some grotty pub to watch three or four very average bands. I payed them via a ticket deal and I made anything from £10 to £70 on a night. Danny was working at Cherry Red Records in Fulham. He would usually join me and we would head home together, across London at about 11pm. I had also asked the West End Centre where we held the Buzz Club, if we could have a few more dates, as I was wondering about trying to promote gigs full time, so I had those to work on.

The weekends were all about clubbing.

Andy managed The Honey Smugglers, this was the first release on Ultimate Records, cat. no. Topp001T.  A cracking tune. We got a few radio plays and the video shown on MTV’s 120 Minutes.

Through Dylan, the plugger, Andy had managed to organise a play for P.U.M.P. on Radio 1’s Roundtable. Maurice, Andy and I all stayed late at work to listen. We were joined by the band, who lived in Camden. Suggs was one of the guests and it got nice reviews. We headed off to The Underworld afterwards to check out a band.

We got ‘Barabajagal‘ remixed by Steve Procter and I heard it get played at Ophelia that Saturday night. Nice.

Andy and Maurice knew Ian Wilson at Atlantic Records. Ian was managing an American band, The Bellower, and we signed them to Ultimate.

Part of my job was to get the records to radio, especially Radio 1. The Evening Session and other night time shows were big champions of the independent and alternative scene. I used to catch the bus from Camden to Oxford Circus and walk down to the BBC. The week ahead’s playlist would get pinned to a board in the foyer by Claire, the receptionist. It was vital to get to know Claire, she would let you know when certain producers were in and let you up to see them.

Andy Winters called a meeting to let us know that he was in talks with Terry Bickers, the ex House of Love guitarist about releasing his new bands’ records.

On March 9 we had a ‘noise special’ at the Buzz Club. Roger from the Falcon managed Milk, so we booked them. Under 100 in but costs weren’t high, so came home with about £50. 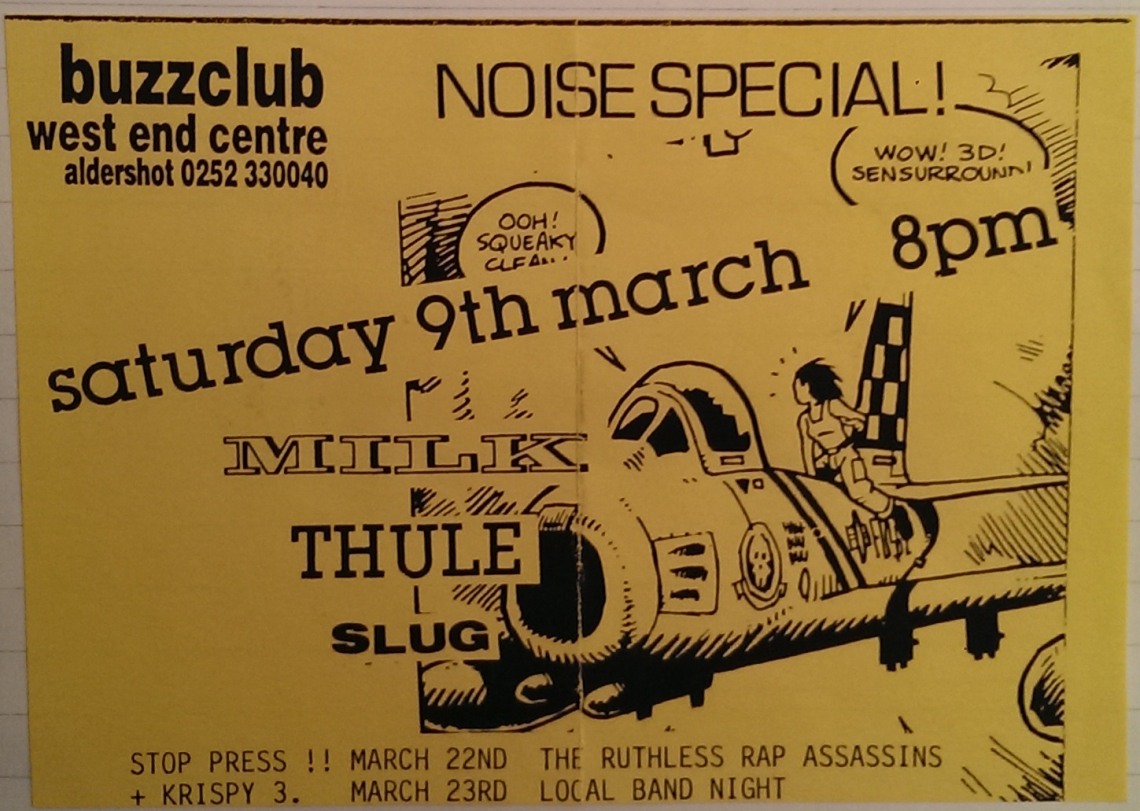 Things moved quickly at Ultimate, the recordings were already done, so the debut Levitation e.p. was given an April release date. I had to walk to the printers in Primrose Hill to collect proofs of the sleeve.I walked along the Camden canal, past London Zoo and on to Primrose Hill. So pretty. I fell in love with the place instantly and would love trips to collect art work. Houses painted in soft pastel pink, blue and yellow. Looking down into their wonderful kitchens and wine racks as I walked past.

On my way back, a lad on Camden High Street saw it said Levitation on the sleeve and gasped, I let him have one of the proofs to keep and went back to the office with one too few. 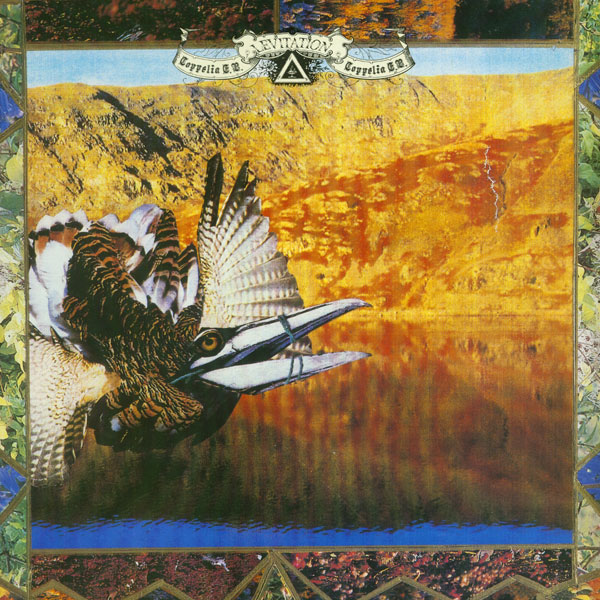 We had fliers for the next Buzz Club printed and would spend evenings in our room in Stoke Newington, taping up bundles of them together to send to the local Our Price shops and other record shops to ask them to display them on the counters. Promises of guest list places in return. We also had a Buzz Club mailing list. We would write all 200 names and addresses on envelopes, put stamps on and post out the fliers. It was handy to get a few booked up in advance so they could all go on one flier or poster and save on printing and postage costs.

On 22 Friday March The Ruthless Rap Assassins and the Krispy 3, two hip hop acts from the Manchester area, played the Buzz Club. A bit of a step outside our normal band booking, we were experimenting a bit. The night did ok, nearly a couple of hundred in and was a great night. It was also a Friday, one of the few we did that wasn’t on a Saturday. Lots of our crowd had Saturday jobs, so Friday didn’t do as well.

We had another Buzz Club the next night – another local band night.

My own music was pretty much put to one side during this hectic time. I played bass in a band called Neverland and Danny was playing bass in Graham from The Charlottes new band. We did a few gigs each and recorded some demos.

Levitation’s, the ‘Coppella e.p.’ featuring ‘Nadine‘ was released in April 1991 and the music press were all over it. I was organising live reviews along with interviews and single reviews and video plays. Melody Maker were already talking about a front cover.