This was a great night, really good line up.

First on was a work-mate from Our Price Records – Tony Duckworth and his band The Rain. Tony and I worked together in a few different shops and we had a healthy musical rivalry. I was jealous of him because his band, The Rain were signed to the wonderful Medium Cool label from Manchester. Medium Cool was run by Andy Wake, and had already released a brilliant 12″ by The Waltones, featuring future guitarist with The Charlatans, Mark Collins. My band didn’t have a label at this point and I was desperate to be on Medium Cool.

Anyway, The Rain were a great band,  here’s the lovely ‘First of May’

In between the bands we had in the main hall, we were starting to add entertainments to the bar area now too. With the help of Buzz Club regular Mark Nelmes, I had made a compilation video of cool stuff – The June Brides, Lloyd Cole, New Order, That Petrol Emotion, clips from cartoons. We literally had to connect two VHS players together and record from one machine to the other. High tech stuff. We then put an old tv on a chair on the small stage in the bar and hit play. We also started to put live music on in the bar. It meant that some people didn’t buy a ticket to go through to the main hall but the bar was full all night and there was a great vibe through the venue. The West End Centre in Aldershot is a wonderful place. A converted old Victorian school building with lots of cool spaces. Still running and still has a brilliant vibe.

In the bar that night we had the Buzz Club return of Rodney Allen. Rodney had previously played with The Brilliant Corners and my band, Bluetrain at the Buzz Club we did at Camberley Football Club. 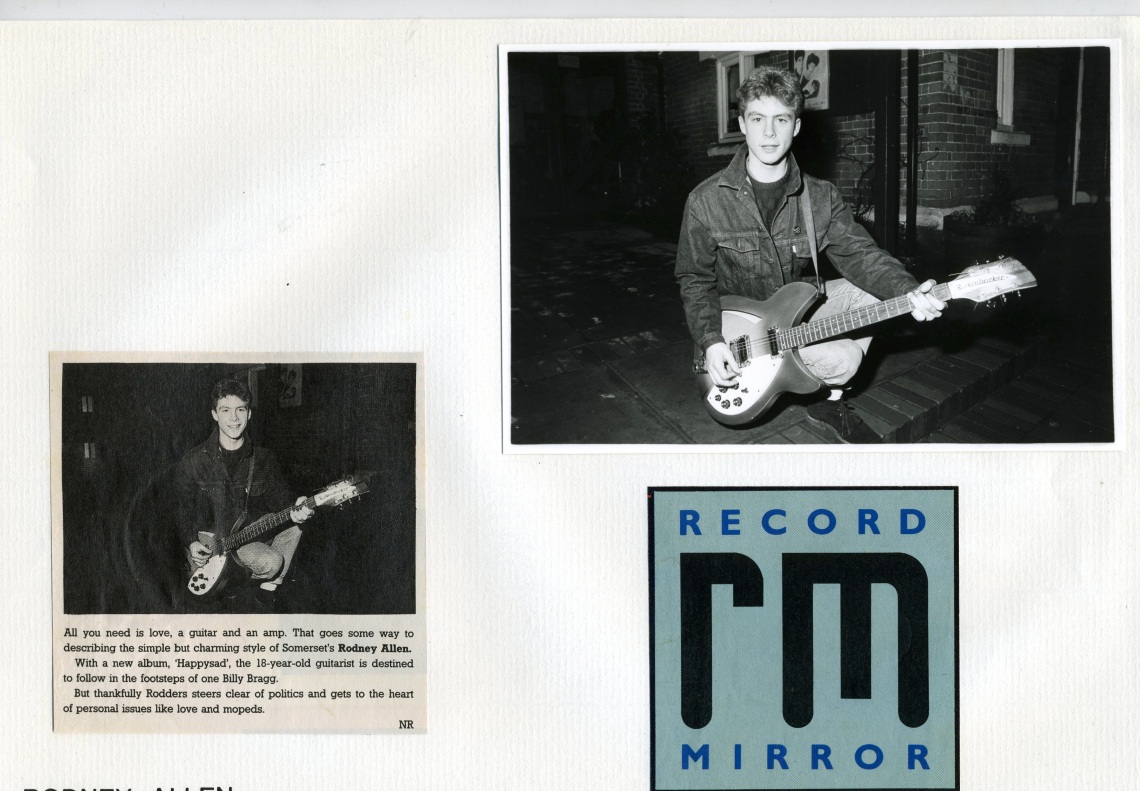 Rodney later joined the Bristol favourites, the Blue Aeroplanes (and in fact, The Chesterfields) and supported R.E.M. ’round Europe. He also invited Bluetrain to play Glastonbury in 1987. We played the Cinema tent which Rodney was booking. It was a very wet one. My first trip to Glastonbury. We went down in my Mum’s nursery school mini bus, which doubled as the band’s van and the nursery united football bus.

This is us supporting The Chesterfields that night at the Buzz Club. On guitar, we had the American, Mark, ‘Frank’ Nemetz. I think we ‘re looking pretty good, both Mark and Danny in black polo-necks. Nice guitars. Mark’s black Rickenbacker and my semi-acoustic.

We had a magnificent time at Glastonbury. A friend there before us phoned us to say it was muddy and to wear boots. I wore my pink Converse ones. After many slow hours driving through the single lane roads leading up to Glastonbury, part of a huge snake of traffic we arrived and pitched camp at about 5am.  Full of energy and excitement we then went for a walk on site. The mud was instant and deep. I slid down a hill, just keeping my balance and looked down at the shin deep mud. My pink Converse hidden beneath the brown slime.

We played on the Sunday so the band had all split to the the far corners of the massive festival site by the time our stage time loomed. I walked up to the cinema tent and asked the security guy who was next on. ‘Bluetrain but they’re not here yet’. Oops. Frantic running through the slightly dryer mud (the sun had shone the day before) backwards and forwards to the van. We found Mark and Kevin. We made it and played a very adrenalin fuelled set, Kevin drumming in his muddy wellies.

Anyway, a few moths earlier, Bluetrain were next on in the main hall.

So to the main band – The Chesterfields. Photo from The Buzz Club – Tim Paton.

(Although, firstly, I’d like to mention – the posters we had made for the gig, all had the ‘s’ missing at the end of the band’s name. Danny and I had to write the ‘s’, with black marker pens, on 100 posters before pasting them up.)

The Chesterfields were from Yeovil in Somerset. They released records on the Subway label, (which made them label-mates with The Shop Assistants) and were truly part of the C-86 movement. They also played the 1987 Glastonbury Festival.