Luckily, Dan also had his own club, The Room At The Top above The Enterprise in Chalk Farm, North London. After the European tour, we played there on numerous wonderful occasions. Dan and his girl friend Emily‘s (from the band The Hangman’s Beautiful Daughters) fliers were hand written and photo-copied for the gigs. These are now considered to be iconic artwork from those early indie days. Plus look at the line-ups, along with Go! Service and The Television Personalities, classic C-86 bands like The Pastels, The Shop Assistants, The Wedding Present, That Petrol Emotion, The Soup Dragons and our label mates, The Might Lemon Drops and 1,000 Violins.

Here we are playing The Room at the Top in 1985. Rudy is playing his lovely Rickenbackerguitar. Mine is a Maya semi-acoustic.

Here’s some rare footage of The Mighty Lemon Drops playing The Room at the Top.

We started to get our first bits in the ’N.M.E’, ‘Melody Maker’ and ’Sounds’. The three weekly, national music papers in the U.K. back then.

This is one from when we supported The Housemartins. We were pretty happy with this one.

Ourselves and The June Brides.

Here’s Dan on stage with the Television Personalities at The Room at the Top in 1985.

After the European tour, we went into Gold Dust studios in London, late 1984, and recorded three tracks for the 12″ release. There was then a slight delay – Wham, the band didn’t like the name of Dan’s Whaam! label, so they gave him some cash to change it, which he did – to Dreamworld Records. This is my debut release, it came out in Summer 1985. This is also a rare thing – a Bartlett composition. On pretty much all our songs it’s Danny’s lyrics and my music, but on this one, you get to hear the inner most thoughts of my 18 year old self. Rudywas 17 when we recorded this.

We played as often as we could.

At The Mean Fiddler in Harlesden….

…where we were joined on stage by Tracy on trumpet.

When we supported label mates 1,000 Violins there. 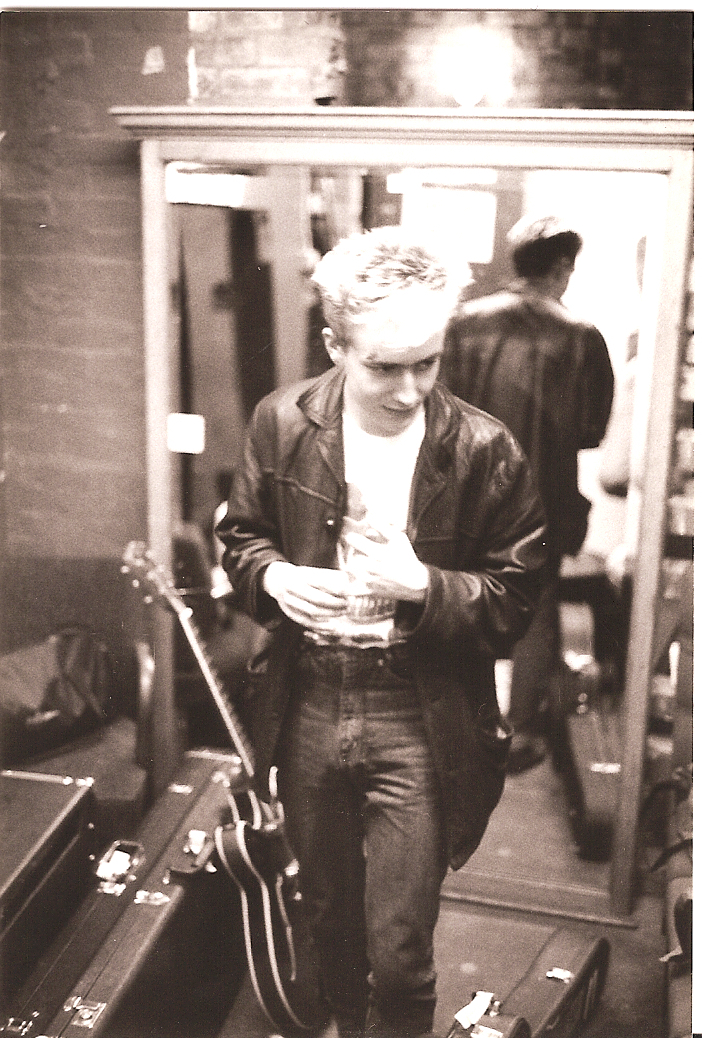 We had another line-up change. Again with the departure of the drummer. Mike Auton left the band and Kevin Morey joined. This meant all four members had gone to the same primary school, St, Tarcisius in Camberley.  Kevin’s first gig was in Germany at a mod all-nighter. A very strange gig indeed. We all had to sleep on the floor of a horrid, damp flat. Our host was a slightly crazed left-wing skinhead. Plus we missed our flight home the next day.

We played these two gigs as Go! Service with Kevin, to promote the 12″.

But decided at this stage, to change our name to Bluetrain.

In 2010 Cherry Red Records re issued the NME C-86 album on cd and also including more bands from that scene – including Go! Service ‘Real Life’. We never made it to the original N.M.E. C-86 and we were pleased to be included on this expanded version!