Working in Our Price gave me a chance to listen to records by bands I had read about but never heard. ‘Growing Up Absurd’ by The Brilliant Corners was one such record. A classic piece of ’80s indie guitar music. The band were from Bristol, I got their address and I wrote to Davey the lead singer. That was how I booked lots of the early gigs, by writing letters or somehow getting ‘phone numbers and calling people at home.

Working in Our Price, also meant Danny I pushed their ‘What’s In A Word’ album pretty hard, including giving fliers for the gig to everyone who bought a copy.

Here they are having a drink in the bar before they played. They were pretty confused that so many people had come to see them and couldn’t quite believe the crowd was really for them!

Here they are on stage. Whisps of smoke in the air, you were still allowed to smoke at gigs. 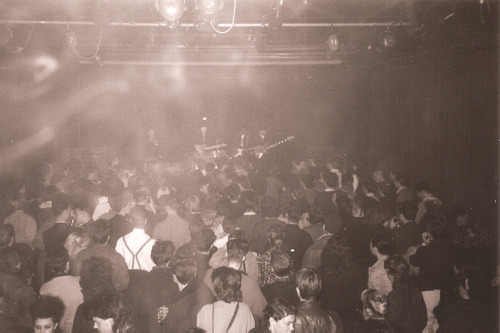 Tim Paton took this picture. I think Guy Van Steene took the ones above.

I recently got sent these two picture by Pat Doherty who worked on the Buzz Club nights at the West End Centre. A lovely colour shot plus Kevin, the Bluetrain drummer, back stage (we supported The Brilliant Corners that night).

It was a fantastic night and we invited them back to play a few months later at Camberley Football Club….more of that one, including live recordings soon.