Danny was working in the Camberley Our Price Records, so we decided to hire Camberley Football Club for this Buzz Club. We were both really into Bristol’s The Brilliant Corners and he had been selling a few of their records in his shop, so it made sense. They had played before, earlier in the year, to a packed audience at the West End Centre in Aldershot for us and we decided to book them again and change the venue and town.

The ‘Growing Up Absurd’ album and the ‘Fruit Machine e.p.’ were both pretty popular records.

It was a brilliant night. First on was Rodney Allen, a young man, also from the Bristol area. I loved his ‘Happy Sad’ album, released on the Subway Organisation (SUBORG 2 in fact). He was too young to drive, so his Mum and Dad gave him a lift. I remember them sitting happily in the bar watching all the bands. Rodney later joined The Chesterfields for a while and then, The Blue Aeroplanes with whom he toured Europe supporting R.E.M.. Rodney played the Buzz Club again, so more about him next time.

Next on were local band, New Tennessee Waltz. Danny got to know their singer Gary through working in the record shop. Gary loved indie music and he bought The June Brides album (and The Brilliant Corners) and fell into conversation with Danny and is still a great friend of ours today. More about New Tennessee Waltz soon too.

After N.T.W. was Bluetrain, the band Danny and I were in. Here’s a live recording, by Dave ‘Fruitier Than Thou’ Driscoll from that night. This is ‘Parade’ from our ‘Land of Gold’ 12″, released on Dan Treacy’s Dreamworld label, it was due out soon after this gig I think. This photo is us sitting under the bridge by the canal in Frimley Green in Surrey, the village I grew up in.

And so to the headline band. These photos are by Tim Paton, who we were so lucky to have capture many great nights for us. 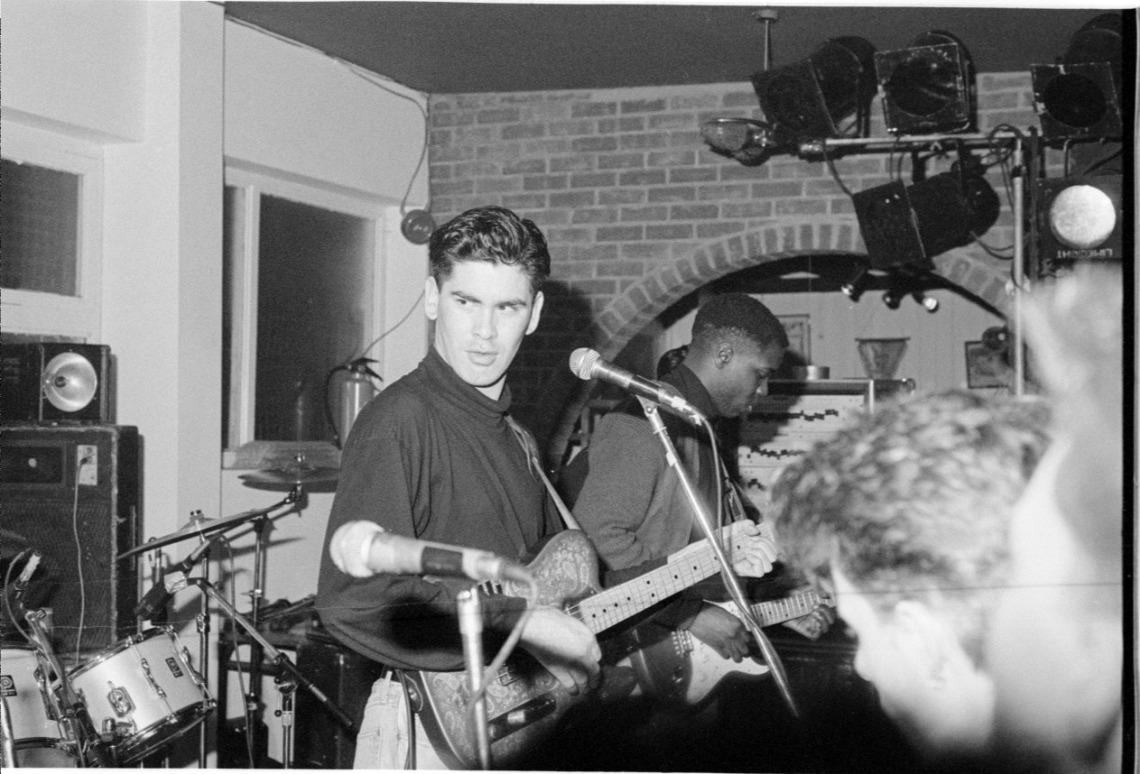 Here’s ‘Brian Rix’, again recorded by Dave Driscoll – and again, we were so lucky to have Dave make so many recordings of these Buzz Clubs. After watching Bluetrain, Davey asked me if I would sing backing vocals on this, as they were due to go in the studio in a couple of weeks to record it. I was very chuffed and obviously said ‘yes’! At the end of this recording, he mentions ‘a local celebrity’ would be doing backing vocals…

And finally, here are some more of the unearthed treasures from Phillip ‘Hutch’ Hutchinson. Found in his garden shed last summer, scanned and sent to me. Colour photos of The Brilliant Corners, live in Camberley and not seen before. 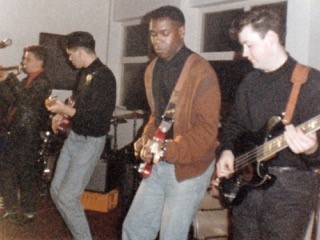 A classic night from start to finish.